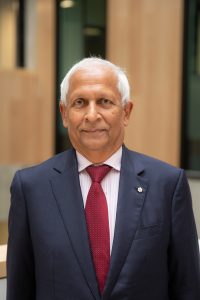 M.G. Venkatesh Mannar, on retirement as the President of the Micronutrient Initiative, joined the University of Toronto as an Adjunct Professor in the Department of Chemical Engineering. He is also an Adjunct Professor in the Department of Nutritional Sciences at Cornell University. He is a global leader in public health and nutrition with 40 years experience in pioneering effective international nutrition and development initiatives focused on the world’s most vulnerable citizens. As President of the Ottawa-based Micronutrient Initiative (MI), he directed the organization’s mission to develop, implement and monitor cost-effective and sustainable solutions for micronutrient deficiencies. Under his leadership, MI has grown to play a major role in the development and expansion of supplementation and food fortification and programs to address hidden hunger in Africa, Asia, Latin America and the Middle East. His work through MI raised the awareness of micronutrient deficiencies, and now directly benefits 500 million adults and children in more than 75 countries. Since 1993, he has been actively involved with U of T in the development of technology for double fortifying salt with iodine and iron. Regular use of this double fortified salt over 8 months by 3.4 million school children in India, resulted in the complete elimination of iodine deficiency, and the reduction in the number of anemic children by approximately 1 million. This amazing result was obtained without medical intervention, at a cost of a few cents per child. The program has been expanded to 5.5 million children in Tamil Nadu, and will reach another 20 million children in additional Indian States who will implement the program beginning in 2016. He is an Officer in the Order of Canada, Canada’s highest civilian honour.