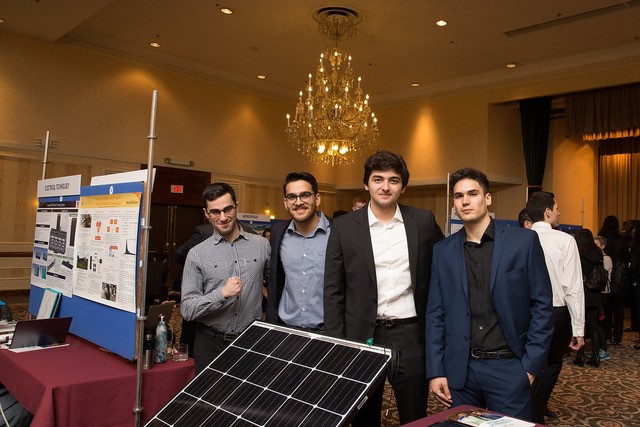 Electricity access in Kenya is low despite the government’s ambitious target to increase electricity connectivity from the current 15% to at least 65% by the year 2022. Of Kenya’s population of 48,461,567 (as of 2016), 74% live in rural areas and 36% have access to electricity. A rural primary school located in Kirindon, Kenya hopes to implement a digital learning program to enhance the quality of education. World Vision Canada (WV) has established an Information Communication Technology (ICT) lab in this off-grid school, and is performing pilot tests of their digital education system at schools in remote areas of Kenya that have on-grid charging systems. The lab consists of 30 tablets, a Raspberry Pi (server) and its associated battery. The capstone group’s goal was to establish a method of powering the lab. The primary objectives were simplicity for both use and implementation, operation, maintainability/troubleshooting, robustness, safety and scalability. The budget allocated was $CAN 2,500. When comparing all available electricity generating technologies, PV solar technology was selected due to how well the technology exploited the service environment. After determining that the system would be fully Direct Current (DC) based, the team went ahead with an inverter-less Balance of System (BOS) design. The daily energy requirement was calculated to be approximately 1215Wh. The storage capacity of the system was then calculated by accommodating for consecutive cloudy days, prolonging battery life by regulating depth-of-discharge of the battery bank, and accounting for temperature variations in the space. This storage capacity of the battery bank was calculated to be 5,208Wh. The system consists of a 300W solar panel, a charge controller, a battery bank with four AGM deep-cycle golf cart batteries, a terminal block and three custom modified 10-port USB charging stations.

Along with the electrical system, a scalable mounting structure and power box (cabinet) housing internal components was finalized. The team proceeded with testing a prototype with 4 tablets, two 7-port USB charging stations, a single AGM battery and a 300W panel to more accurately determine efficiency values, model the charging profiles of the battery and devices, and to confirm the energy requirement. Due to the constant issue of measuring an accurate State-Of-Charge of the battery with the charge controller, a different model along with a battery management system was added to the final design. Through testing, the team learned the behaviour and efficiency of the different components and accounted for them in a revised load energy requirement of 1194Wh and the final design. The team also created an implementation and troubleshooting manual to aid the users in installing and maintaining the system. ​The project was completed at $1,951.18. If successful, WV would look to scale this system over multiple schools in other regions of Africa and other parts of the world.